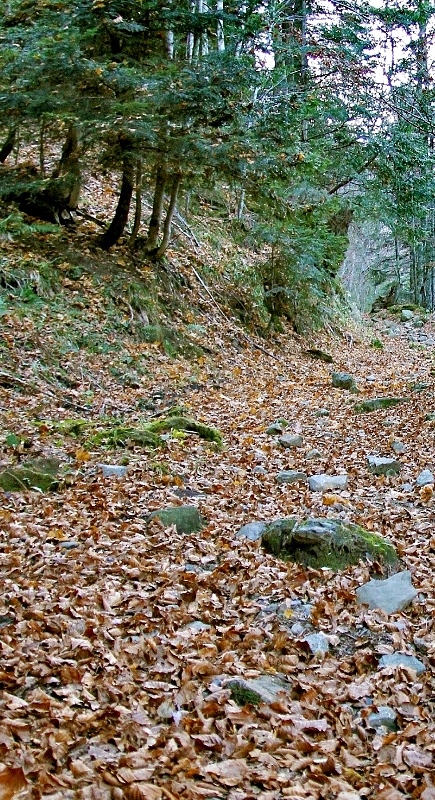 Have we ever wondered what our forests and grasslands would be like if the leaves that fall every autumn remain on the ground as they are? An important role of springtails is their contribution to the ecological balance of the soil microfauna, which allows the dissemination and regulation of fungi and bacteria populations. These are essential for a good flow of nutrients such as nitrogen, phosphorus and potassium (components found in industrial fertilizers) that are vital for plants. Without springtails, many elements would be static within the microbial biomass.
When the leaves fall from the trees they decompose due to the presence of microscopic fungi whose spores are transported elsewhere by springtails. The mycelia of the latter can thus colonize new areas and contribute at the same to a homogenization of the plant decomposition. The springtails who love mushrooms graze the hyphae of the latter which develop on the outside of the leaves thus regulating their proliferation. by allowing to also contain the proliferation of pathogenic species responsible for the melting of the seedlings.

Different phases are noted in the organic fragmentation cycle through the illustration above. At each stage, springtails play a major role. First, the fallen leaves of the tree are first piled on the ground where they are first washed by the rains then:

1. The microfauna comes into action. Arthropods (springtails, mites) begin to attack the epidermis of the leaves where the first holes will soon appear.
2. The small larvae of Diptera enlarge the notches and the microflora (bacteria and fungi) enters into action.
3. Arthropods continue to cut leaves, the strongest of them attacking their veins softened by microflora.
4. Debris fragmentation continues and some of them mix with the droppings from the previous stages.
5. Disseminations of organic residues and ambient autumnal humidity stimulate the microflora and accelerate the dispersion of mineral elements.

Personal note: It is unfortunate that at the end of this cycle, chemical compounds that can not be assimilated by these living organisms, if they do not kill them, dangerously jeopardize future biodegradation cycles. Over time, increasing concentrations of harmful substances in soils are formed.

Any action that aims to preserve biodiversity does not find its sole justification in ideological considerations, but more simply in a manifestation of survival instinct. Thus, the man who spreads insecticides or other poisons targeting animals and plants parasites (substances "modestly" named phytosanitary) will derive a benefit in the very short term. On the other hand, he can rest assured that his actions will have consequences of which he will one day be a victim.

I mainly mentioned springtails as decomposers because, as we have just seen, they play an important role in the cutting and fragmentation of plants. But, these are accompanied by a multitude of other actors with diverse but complementary functions. From bacteria (microflora) to dust mites, protemas, nematodes, myriapods (microfauna) to the earthworms or ants that deal with grinding and dispersal, it's a whole world of life that goes into action, in which everyone acts within a specific sector. For example, microscopic bacteria and fungi mainly deal with the biochemical decomposition of dead plants by taking the proteins and cellulose they are able to transform into CO2, H2O, SO4 and especially NO3 (better known as nitrate and manufactured industrially as chemical fertilizers). These substances associated with other woody residues (from lignin, a constituent bio-molecule of wood) will provide humus essential for plant nutrition. Organic decomposition is therefore a chain that has many stakeholders and whose springtails are only one link.

To get an idea of ??what these decomposing organisms represent in terms of population and if we retain as a surface unit the footprint of the two steps that a walker leaves on the ground of a forest, the average figures1 are impressive:

The duration of the organic decomposition is variable according to the nature and the essences of the plants concerned. The decomposition of conifers is slower than that of hardwoods. So a tree can put 20 to 40 years to be totally reduced. For example to lose 50% of its mass, a litter made of beech leaves will take about 24 months whereas for leaves of lime tree it will take only 6 months. On the other hand the decomposition of the spines of a Scots pine will take from 6 to 8 years. It is accepted that the role of the sole pedofauna (springtails, myriapods, pseudoscorpions, protoures, diploures ...) accelerates by a factor x 15 the degradation process, compared to the same process that would be carried out only with the help with fungi and bacteria.