Setae and sensilles of springtails 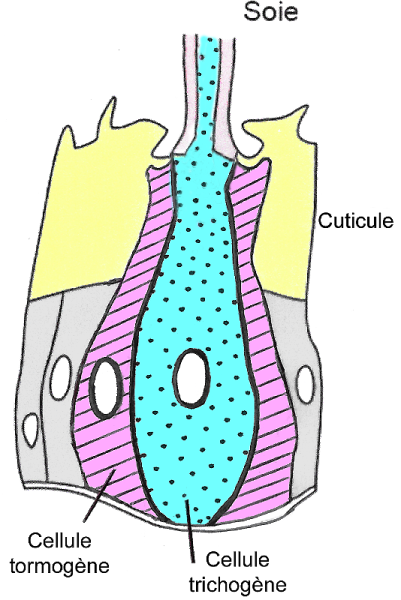 The full bristles and the sensory bristles (sensilla) play several roles, respectively that of protection or ornament and for the innervated bristles, the role of mechanical receiver but also for some of them that of chemoreceptor. In order to better understand the functional difference between a simple silk and an innervated silk, here are two diagrams:

The first diagram (on the right) shows the typical layout of a solid silk. With no sensory cells, it plays a special role in springtail in the protection against water and more particularly the risk of asphyxia (see The cuticle).

The sensilla, in turn, are distinguished from full bristles (or simple) because they have at their base a nerve cell that allows the detection of voltage variations or vibrations transmitted by touch and air or liquid flows. This nerve ending also allows in some cases the senses to be able to be tasty or olfactory. The taste bristles are generally located on the mouthparts and olfactory bristles opening through pores (photo below right) located more particularly at the antennas. The latter are able to detect the chemical molecules that penetrate the stem of the silk through the fine pores with which it is endowed. 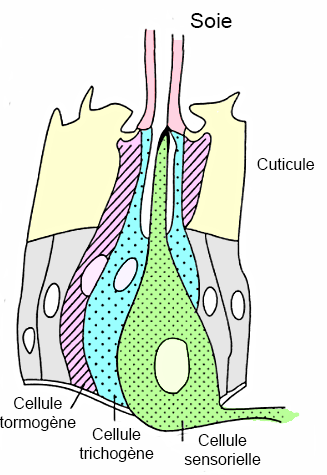 The second diagram (left) shows the basic structure of a tactile sensilla in arthropods.
It is composed of a sensory cell whose dendritic end penetrates into the cuticular canal of the secreted silk by an adjoining cell, called trichogene which surrounds it and which, itself, is separated from the rest of the integument by another "tormogenic" auxiliary cell.

The sensilla can present various forms from the elongated silk exceeding largely the cuticle, until the button just flush or pressed into a small crypt (photo B&W below right). These tactile sensilla are found on a large part of the integument and are particularly abundant on the antennae, tarsi and cerques.

The interaction between the silk and the end of the sensory cell is favored by the dendritic structure of the latter, rich in microtubules associated with the membrane which is in contact with the silk, so that any movement of the latter causes distension. capable of inducing a potential directly transmitted in the form of an electrical impulse to the central nervous system1.

It should be noted that the sensilla, in addition to their mechano-receptive capacities, are distinguished according to two types, taste and olfactory sensilla disposed respectively on the oral apparatus and at the level of the antennas.

The in-depth study of the different silks of springtails shows that some can specialize to perceive various stimuli (chemical, mechanical ...). The researchers have listed four types: microsetae (which uniformly cover the body), scales (which are flattened bristles), macrosetae (morphologically differentiated, less numerous and distributed specifically) and trichobothroses (mechanoreceptives, long and thin) . 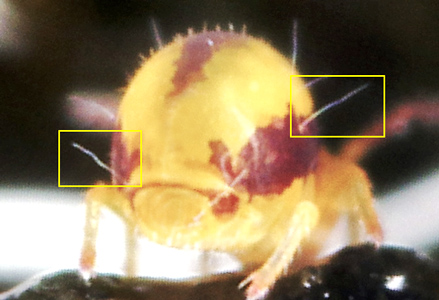 The base of a trichobothria (bothriotrichium) is therefore not a simple root, but a structure that includes a nerve cell. Frans Janssens compares its operation to that of a joystick. The smallest movement of air makes it move. To illustrate the mechanical sensitivity of the trichobothria, I managed to make a video under magnification of about x 240. It was then enough to move my hand about 40 cm away to be able to verify that a flow of even the most imperceptible air was reflected in a movement of the trichobothria. The reaction of this sensitive organ is absolutely extraordinary. This explains how the springtail, without recourse to its vision or to any of its sensory sensors, can sense at a distance from which direction a possible danger is coming.

Note : The photographer's approach to springtails must take these perception modes into account and get closer to his subjects by making very slow movements of low amplitude, while at the same time controlling his own breathing.

To view the video, click on the image below.

Setae also have a wide range of shapes. Thus we find straight, curved or "s" shaped, but also with sharp, flattened, forked or branched tips (comparable to a feather duster). They can be bigger at their base or, conversely, have wider shapes near their ends (like an elongated club).

Beyond their sensory functions, some setae have others particularities. This is the case of a silk called in English "clavate seta". Some species of springtails have it, such as the Tomocerus, for example. The image below shows the implantation of one of these bristles on the pretarsus of a Tomocerus vulgaris. The function of this silk is to allow the springtail to fix its position. If the use of such a silk is not very critical on a plant substrate or one with roughness, it is not the same when the springtail lands, after a jump, on a smooth surface. Indeed, the extremities of its legs (claw + empodium), hard and sharp, do not allow it to stabilize itself in contact with such a support and it would have a good chance of slipping.

For this, the "clavate setae" have a flared end that carries a complex microstructure with high-performance adhesive properties. Therefore, including on a surface such as glass, the springtail can attach itself when landing a jump.

Note: It may be noted that the collophore (ventral tube) has, among other things, similar properties that also ensure the stabilization of the springtail (see here)

In taxonomy, due to their specific distribution and their variable density, the setae are the subject of studies allowing or helping to characterize the species. We can therefore consider that the bristles of springtails, through their wide morphological palette and their various capacities (we find them just as operational as in their distant cousins, insects and arachnids) play a major role in their sensory potential, probably well more important than their eyesight, whose organs (ocelli/eye patches) are generally poorly developed, atrophied or even absent.