Reproduction of springtails can, depending on the species, be sexed (male + female) or asexual (parthenogenesis). Considered primitive animals, some of them reveal evolved behavior, varied and adapted to various biotopes.

On the principle, the male deposits one or more tiny stems surmounted by a sphere, named spermatophores (opposite, spermatophore of Dicyrtomina ornata f.couloni)4. The sphere that contains the spermatozoa is protected by a shiny and whitish coating. The female then places her genital opening on this "drop" and stores the sperm in a receptacle before fertilization of the eggs. Variations were observed according to the places and the hygrometry rates which condition the rate of drying of the sperm.

Below 4, genital opening (papilla) of a Poduromorph Deutonura monticola (photograph taken with a binocular magnifier x160. 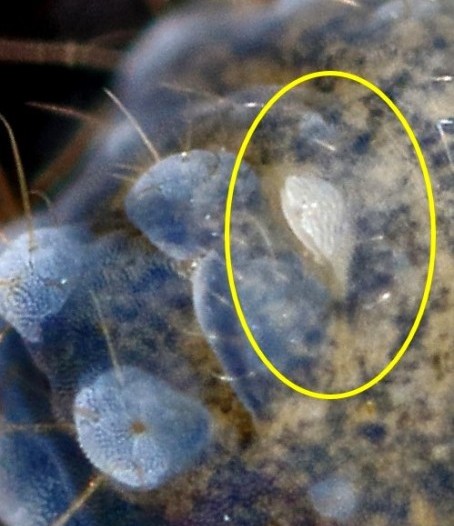 The strategies adopted by springtails generally aim to reduce the duration of sperm exposure in the open air. For example, in the Orchesella, the transmission takes place in what JM Betsch1 calls indifference between the two sexes, proportionately kept, because the female of one species can not be mistaken in recovering the sperm of another species. Indeed, the male takes care to sign his sperm with a substance specific to his species. The decrease in activity of this substance also marks the life span of a spermatophore that does not exceed a few hours in the best case or less if the external conditions are unfavorable. When a spermatophore is no longer fit for fertilization, it is devoured by the male who deposits a new spermatophore. It should be noted that in some cases, males find themselves in competition and do not hesitate to devour the spermatophores of their congeners when they cross in their path.

In Podura aquatica (below left), living on the surface of pools, the male (blue) deposits three or four spermatophores in an arc (red dots) next to a female, which he then pushes vigorously towards them.

The strategy put in place by Dicyrtomina minuta is quite original: the male encircles the female with several spermatophores so that the female can not do anything but hit them while moving. 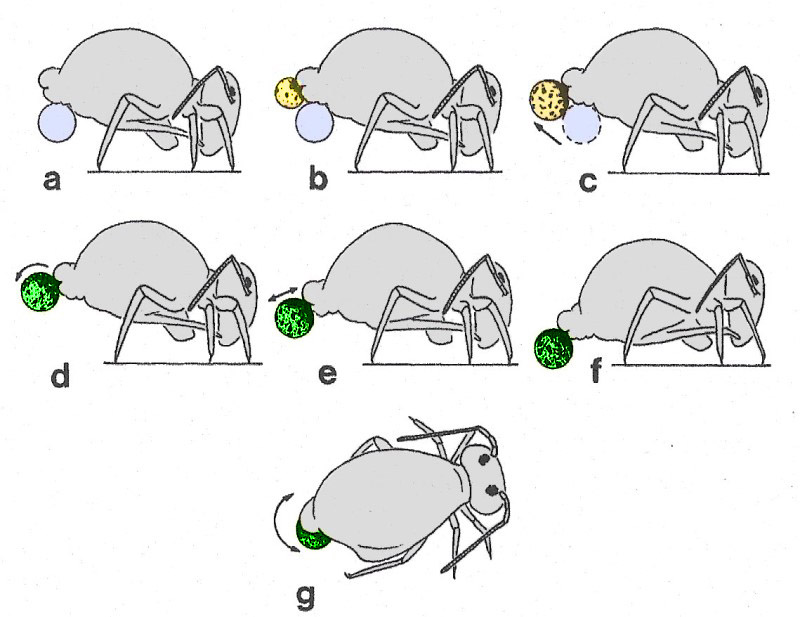 Sminthurus viridis (opposite)2 is more economical, it deposits only one spermatophore, to which it will then push the female who will store it in its genital parts. Subsequently, the female will lay the fertilized egg by depositing it on the substrate (ovosition) after covering it with a kind of fecal envelope that will protect it from desiccation, but also certain predators such as mites or fungal attacks. The diagram below breaks down the process of laying the female: First, the female starts laying eggs by expelling the egg (blue) while keeping it suspended at the entrance to her genitals (a) then, she begins to defecate (b) before putting the egg in contact (c) with its excrement (yellow). Finally she makes the envelope that covers the egg (green) by a succession of movement (d, e) then it deposits and performs a side swing to allow it to detach (g). It may be noted that these excrements are very rich in mineral particles previously absorbed by the female and have easily passed through her digestive system. 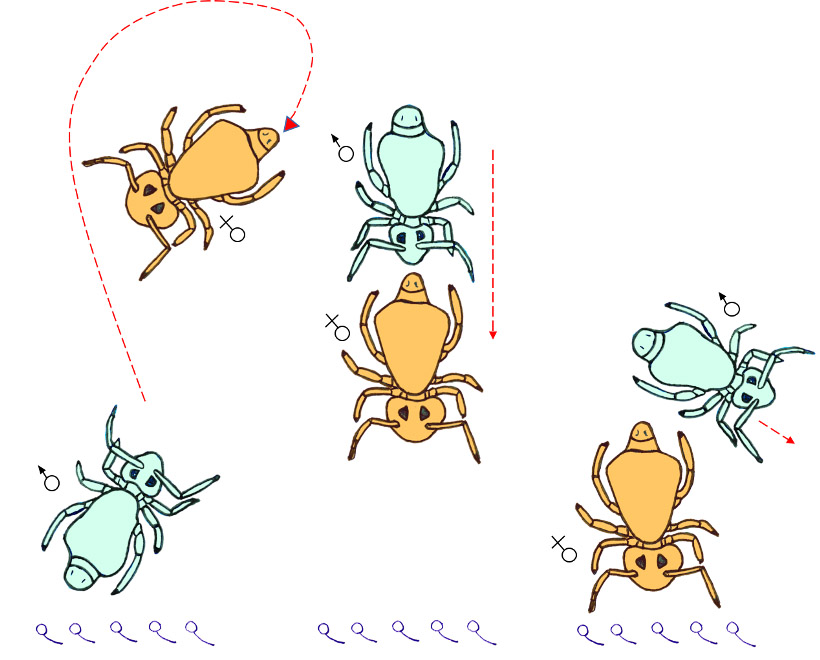 Other other families of Symphypleones, males are in almost constant search for receptive females. The parry then consists of a long series of rather frenetic stimuli on the part of the male, to which the female responds by running away if she is not receptive. If it is receptive, the parry continues until the male is assured that the female is ready to receive the sperm. Only then does it deposit a spermatophore that the female absorbs immediately with her genital opening. The spermatophore is thus exposed to the open air for a very short period of time which allows these springtails families to colonize open biotopes ranging from meadow to rock or to more arid areas.

In Bovicornia3, a springatil of southern Africa, during the first contact (1), the male is positioned face to face with the female, then he surrounds the head of the latter with its antennas and performs small alternating rotations with his head to stimulate the female. When he feels receptive he performs a half turn on himself (2) so that it is facing his genitals, it is then that he ejects a droplet of sperm taken immediately by the mouth of the female who will then deposit it on the ground (3) before coming to rest on it to put it in contact with its genital part (4).

There are other specific behaviors ( Look this vidéo : Deuterosminthurus pallipes)that are often dictated by the nature of the biotopes in which springtails evolve, with
however a constant, that of not being expensive in terms of vital resources.

Sexual dimorphism is not very noticeable in springtails because it is rare. Only a detailed observation of the genitals allows this determination. The only dimorphism that I have observed (except for a smaller size that sometimes characterizes the male) is on the antennae of the male Sminthurides aquaticus (below)4 who usually lives on the water at the edge of pools and ponds.

During the love parade, the male puts his antennae in contact with those of the female. Then, thanks to the kind of hooks that fill his second and third antennal segments, it is enough for him to slightly tighten his own antennas so that the 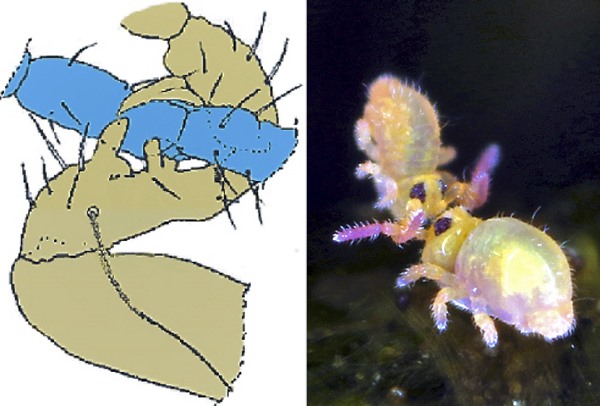 partners are hooked to each other, as shown in the illustration above. . Then, the female straightens her head which has the effect of hoisting the male in the air so that it does not touch the ground. In the spring I have the opportunity to observe this ritual that takes place on the water of temporary ponds located not far from my house. Each time, I feel a certain emotion, so much I can not remain indifferent to this spectacle of "another world". And although it takes place at our feet, few of us will have the privilege of being spectators.

The parthenogenesis I mention at the beginning of the article occurs when the female lays eggs that have not been fertilized but they give birth to a viable offspring. The presence of males is no longer necessary. It is generally accepted that springtails that reproduce in this way live mainly in euedaphic areas (underground, in the ground). The most well known parthenogenetic species and Folsomia candida (often raised in research laboratories to be used as ecotoxicology marker because of its very fast reproductive cycle making it also a standard guinea pig).

Among the parthenogenetic springtails, Neanura muscorum, a Poduromorph that lives in the south-west of France and I often meet in rather humid places (image above)4.

The eggs deposited on the substrate develop until the embryo is in a state of hatching. It then breaks a kind of operculum that is on the envelope that protected it and can begin to evolve in the open air. Successive moults will allow him to become an adult. The speed of egg development is essentially temperature related. For example, at Entomobrya nivalis the development of eggs lasts 25 days at 9 ° C., 15 days at 13 ° C. and lasts only one week at 20 ° C., thus satisfying an almost linear duration / t ° curve.

Note: In some species, such as Anurida maritima (Poduromorph), which live in seaside interstitial sands, adults all die in the fall leaving their eggs alone for the offspring. It is only in the spring that they hatch to give birth to the new generation.

Below, I propose a table6 giving the dimensions of the spermatophores of some common species. The value of the ratio (left column) can, from a photograph, to target a species even if one does not have a dimensional scale. 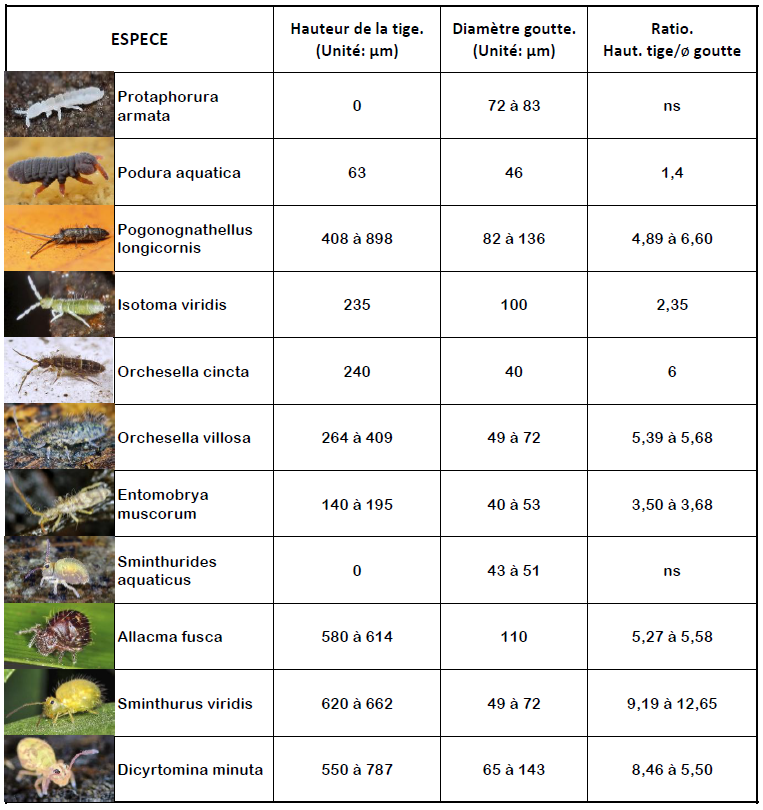