Also called ventral tube1, it is located on the first abdominal segment (above, images made with an electron microscope) 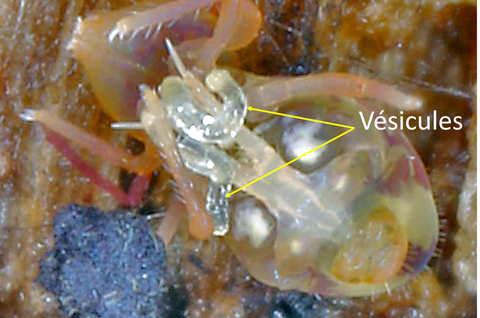 More or less elongated according to the group (generally longer in Symphypleones), it consists of a ventral tube and carries at its base a pair of thin-walled excretile vesicles. (opposite2 on the right on a Dicyrtomina ornata)

These vesicles retract into the cylinder via twelve so-called retractor muscles. The vesicles are equipped with sensitive organs interpreted as hydroreceptors, osmoreceptors * and pH receptor (acidity / basicity) so the animal can increase or reduce these values ??by exiting or retracting its vesicles. The main function of the collophore is therefore water, through the transport of water and ions to the hemolymph **. 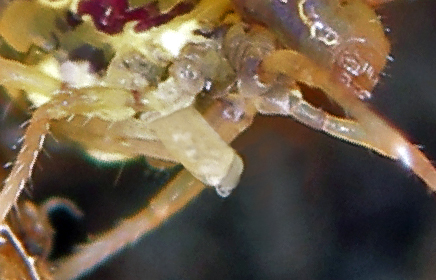 This organ would serve secondary functions, such as, for example, thanks to an adhesive gland, to maintain the springtail in place when it evolves on smooth surfaces. We can also mention the respiratory function through the passage of oxygen through its thin wall.

Some researchers think it can also play a buffer role after the jump. For species on which this organ is highly developed, it could also be used for the toilet. The collophore would also play a role in the balance of electrolytes and the secretion of a "healing liquid". Opposite, on the left2, the collophore released from a Dicyrtomima.

It may be noted that a pair of labial nephridia (equivalent to kidneys) are located in the caudo ventral part of the head. Each consists of a small bag (sacculus) in which podocytes (branched cells) are present, and a tubule (structure in the form of a small tube). The distal part of the two nephridian tubules is found in an end bag posterior to the labium. The fluid that collects in the bag is usually hypo-osmotic for the hemolymph and can be thought of as urine. This "urine" is evacuated in the ventral groove and passes into the ventral tube by capillary action.

The image below shows the ventral groove from the start of the oral cone and then on the first two thoracic segments of a Neanuridae. The insert1 comes from a photograph with an electron microscope showing the detail of a channel.

The epithelium of the nephridian tube has the ultrastructural characteristics of resorbing cells, so that nephridia almost certainly fulfills the functions of kidneys for ultrafiltration and reabsorption. Thus, lip nephridia and the ventral tube are involved in the ionic and water balance.

The scientific name for "collembole" should be John Lubbock (1834-1913) because of the presence of this ventral tube, the Greek κόλλα, kólla (glue) and έμβολο, emvolo (piston).

* A osmoreceptor qualifies a sensor present on cells, sensitive to changes in osmotic pressure. An osmotic phenomenon is related to osmosis, to osmoregulation. Osmotic pressure, osmotic shock and osmotic action make use of pressure differences between two media, usually aqueous or liquid. What is osmotic is often accompanied by a hydrostatic phenomenon.
For example, humans have osmoreceptors (nerve cells) that inform the brain of the hydration state of the body and trigger thirst and urine retention. If they are activated in case of dehydration, they are inhibited as soon as the drink is absorbed, even if the water balance is not yet restored.

** Hemolymph is the circulatory fluid of arthropods (insects, arachnids ...) whose role is similar to the blood and interstitial fluid of vertebrates.

1: Images from "Atlas of the biology of soil arthropods" - G.Eisenbeis and W.Richard (1985)