Above1, we can see the diversity of biotopes in which springtails evolve. Each term included in this scheme characterizes a customary habitat for springtails. They are found living in the interstices of sands at the seaside, then on the surface, in the superficial layers of soils and finally in the soils themselves (so-called epi / hemi-eu-edaphic zones). caves or in the snowy areas in the mountains. 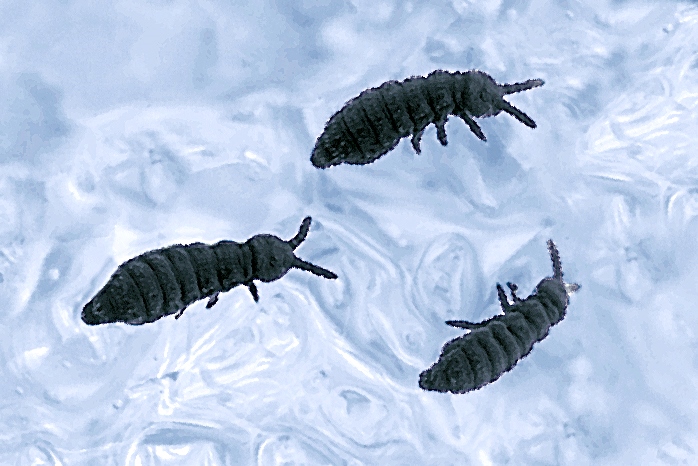 We do not suspect the abundance of these creatures. In some habitats their density can reach several hundred million individuals per hectare, all species combined, in a forest habitat where decaying dead leaves abound. For example, in certain areas you can find up to 100 000 * springtails per m². (Source: futura-science)

They are therefore present everywhere, although they prosper rather in mild climates. Their abundance in the soil increases when the average annual temperature decreases. Nevertheless, some species acclimatize perfectly to negative temperatures. 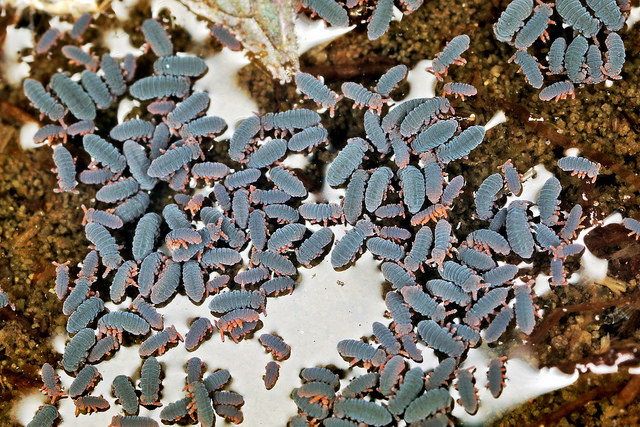 Springtails are found in snowfields or on high mountain glaciers (above, Hypogastrura sp. On ice)2 and even in the vicinity of the polar ice caps. In this respect3, as many animals are forced to live in areas where temperatures can be very low, springtails have to fight against the risk of internal freezing that they would not survive. Several strategies are available to them such as avoidance. The purpose of the latter is to protect them from freezing by means of proteins which they have and which contain hydrophilic amino acids as well as genes capable of being activated in the event of a drop in temperature. These genes control the production of trehalose (a sweet compound, a natural antifreeze with the ability to bind nascent ice crystals to block their growth). Another strategy is no longer avoidance but tolerance to freezing, it is characterized by a "cryoprotective dehydration" which consists, for example in the species Megaphorura arctica, to lose the water contained in its body (to assume the appearance of a curled envelope that can not freeze any more) and that can rehydrate when weather conditions permit. This strategy is also aided by genes that activate when the temperature rises and that promote energy production, tissue repair and cell division. 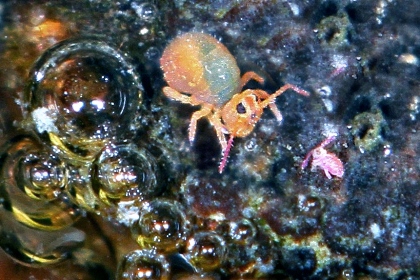 There are also springtails in the bottom of underground cavities sometimes very deep (up to 400 m). In temperate zones they are especially noticeable in autumn, winter and spring. The decrease in summer humidity pushes the species living at ground level to reduce their activity because of the risk of dehydration due to their constitution.

Many springtails are lucifuges (they are fleeing light), which explains why they live in the first layers of the ground (between 1 cm and 5 cm deep) or under the ground to depths of about thirty centimeters . They are also found in upland areas or even in the canopy of tropical areas. I regularly find under bark of dead trees or on old trunks still standing up to about 2 meters high. To develop properly, they need a minimum of humidity and temperatures between +10 ° C and + 30 ° C, which does not prevent some species from withstanding extreme cold. It is found in Antarctica Anurophotus subpolaris capable of braving -40 ° C. Other species are found in ponds and bodies of water such as Sminthurides aquaticus (above, left) 3 or Isotomurus pseudopalustris. The springtails which evolve under the soil prefer the porous grounds, little digging, they prefer to use galleries dug by other animals. 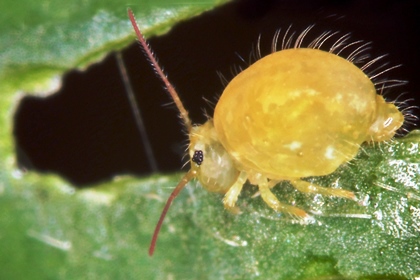 They evolve mainly in areas rich in decaying organic matter such as in the undergrowth. In these areas it is not unusual for their density to reach 400,000 individuals per m².
Their diet can vary according to the species and although the mushrooms are a food appreciated by most, they do not disdain the bacteria. Some are omnivorous while others may have an almost exclusive or very little diversified diet. It is essentially within this last population that we find species considered as devastating. For example, Sminthurides viridis (opposite)4 is capable of rapidly destroying up to 50% of the production of a clover field.

Just as companies are specialized in the destruction of xylophages, some now offer their services to eradicate springtails. I wonder about the long-term harmfulness of these chemical treatments, relatively to a short-term economic loss. Thus for a biotope containing given plant species, the observer is likely to find specific species of springtails. I was able to identify some good places where I regularly find the same species.

Springtails have to deal with multiple predators such as arachnids (spiders, mites pseudoscorpions), myriapods (centipede) or some ants. Below 4 on the left, an ant of the genus Hypoponera captures a Dicyrtoma fusca, on the right, a mite devouring a Lepidocyrtus sp.

When I did bird surveys in the spring, I happened to see sparrows busy pecking in clovers, wondering what these birds might find on these little green leaves before considering that perhaps they drove out Sminthurus viridis which abound there.
.