For a long time the study of the soils was reduced essentially to chemical analyzes, in order to detect the presence and the concentration of various chemical compounds. But the results obtained did not tell us anything about their interaction between these substances and the organisms that were in contact with them. It was not until the second half of the 1950s1 that studies appeared in which DDT was tested on springtails populations. Thomson and Gore2 are among the first to use Folsomia candida to test 29 insecticides. Until the late 1980s other species were used (Folsomia fimetaria, Onychiurus armatus, Orchesella cincta ). It was not until 1998 that Wiles and Krogh3 published a study conducted on the model of an ISO standard.

Nowadays, springtails still play a significant role as an ecotoxicological marker, such as Folsomia candida which, among other things, has the particularity to reproduce well in the laboratory, in addition to the development, biology and reproduction of this species. species have been the subject of many studies. It is this good knowledge that scientists have that makes it a "standard" species. Used in many experiments it led to the establishment of the standard ISO 112674 which determines the quality of a soil according to the reproduction inhibition of this species. The tests measure the effect of chemical substances on the reproduction rate of springtails after exposure to a natural soil sample, as compared to their exposure to soils with different concentrations of (non-volatile) substances whose impact is to be measured. (method named "spiking" = "doping" in French).

To get an idea of ??the range of substances tested, we can take the example of Folsomia fimetera, which, since 1990, has been used to test the toxic effects of copper, nickel, phthalates, linear alkylbenzene sulphonates and pyrene. dimethoate, polycyclic aromatic hydrocarbons, polycyclic aromatic compounds, veterinary pharmaceuticals and sewage sludge ... and the list is not exhaustive. This method is named "spiking" ("doping" in French).

Consequences of the effects of some substances: ** 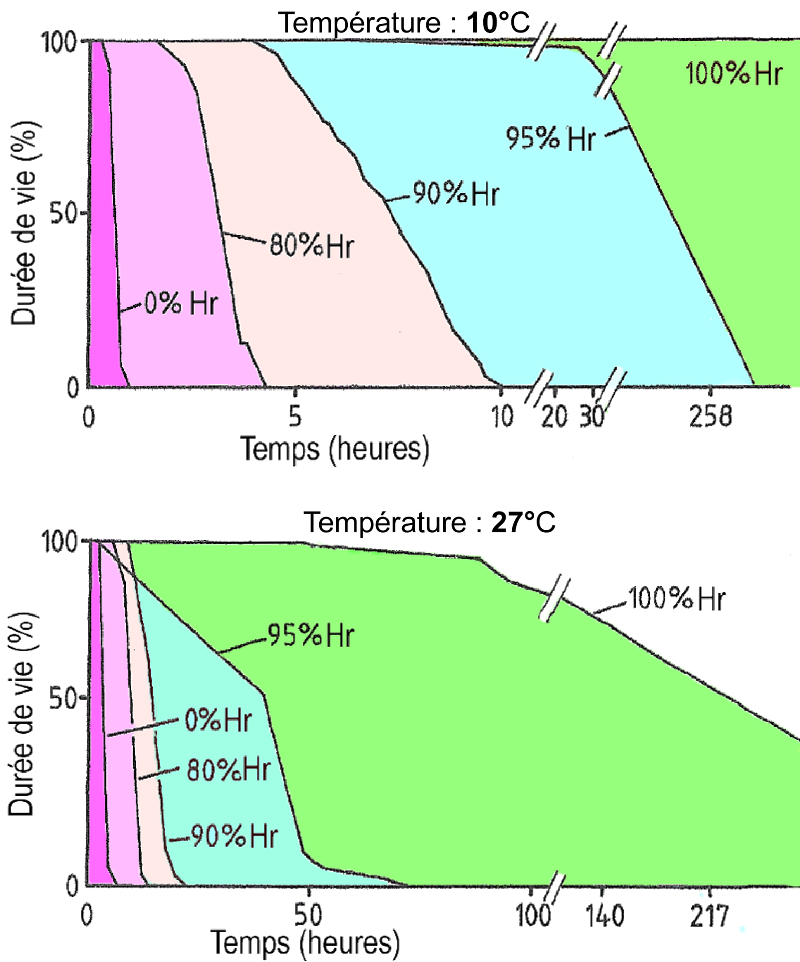 In order to know the behavior of springtails, it is first necessary to study them in natural (unpolluted) environments by varying parameters related to their living conditions. This is for example the case in an experiment which I have taken two graphs opposite5 which shows the behavior of springtail Onychiurus justi evolving in the same substrate subject to two variables: temperature and hygrometry. the experiment was conducted in 1972 by Snider RJ. and Butcher and consisted of given temperatures, held constant, to vary the moisture content. As can be seen in the first graph (T = 10 ° C), a "dry" environment (0% humidity) induces death in less than one hour. At 80% humidity, the service life reaches 4 hours, 90% reaches 10 hours and 95% exceeds slightly a week (time scale is logarithmic here). It is therefore necessary to have a humidity greater than 95% so that this species can live normally.

On the second graph the temperature is set at 27 ° C. At this temperature, the life expectancy below 90% humidity does not exceed two or three hours. At 95% it barely exceeds 48 hours. It is only 95% and 100% moisture that springtails can survive. 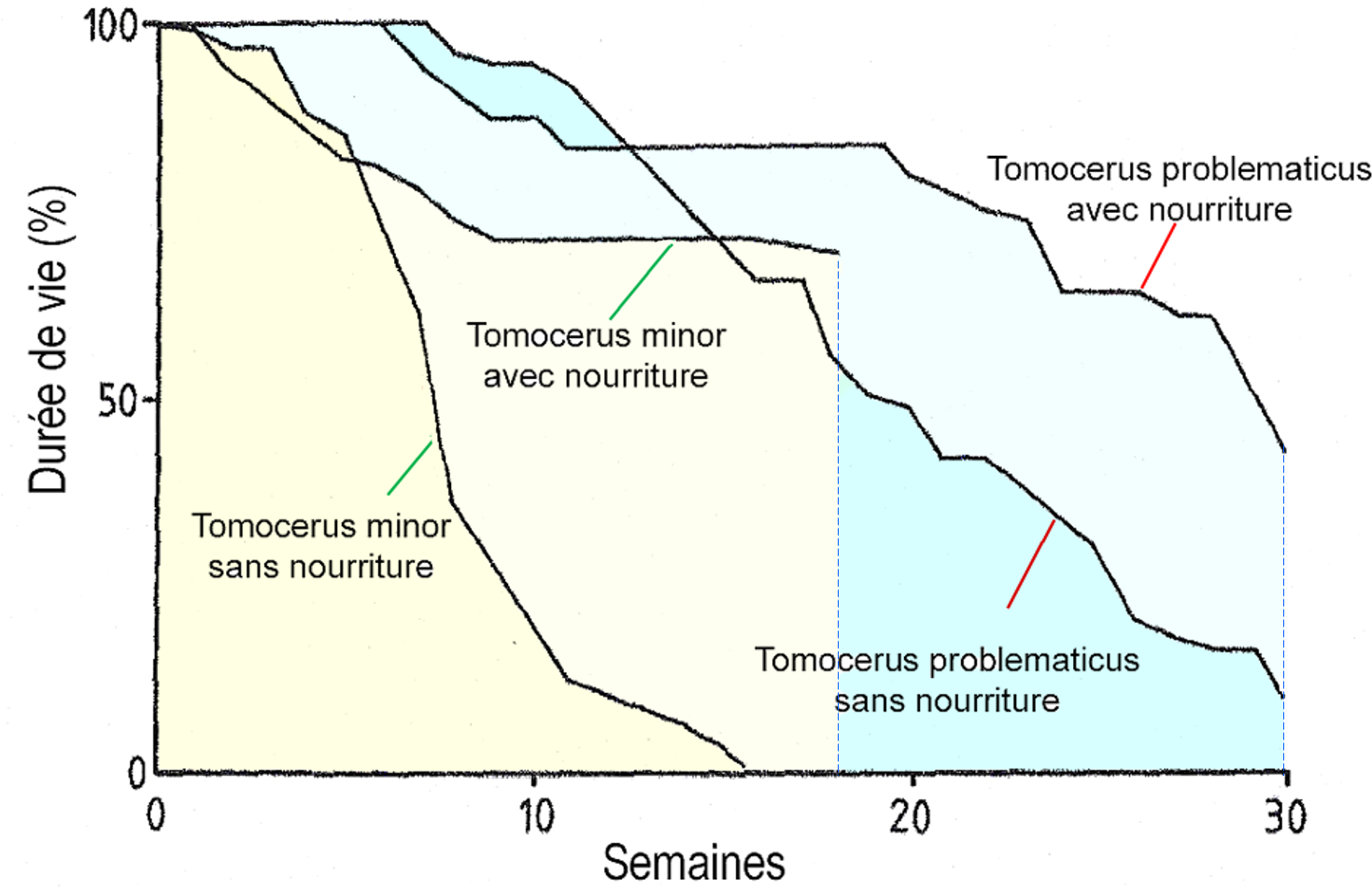 Other forms of experience can be carried out, such as those shown in the graph on the right6. It shows the resistance capacity comparing two species of Antomobryomorphs, Tomocerus minor and Tomocerus problematicus. The variable is simple; all other conditions being equal, the life span of the two species, with and without food, is measured. For Tomocerus minor, who lives on the surface of the soil, it can be observed that without food the survival can go beyond ten weeks for a small percentage of them (around 10%), the median value being around 6 at 8 weeks. In Tomocerus problematicus which is a troglodyte species, the curves spread out much longer, so without feeding 50% of them can live for four months and 15% can take 6 months.

A final example is a test for resistance to ultraviolet radiation7 (which corresponds to exposure to the sun). For this we use two different substrates:

Note: Following these tests, the researchers returned Folsomia candida to normal growing conditions. They were surprised to find that the amount of eggs produced by the latter increased according to whether they had been exposed to UV for longer periods of time. This phenomenon can highlight that an increase in stress induces survival behavior through reproduction efforts.

Obviously, I oversimplify the interpretation of these results, deliberately stopping the prerequisites such as the age of the population tested and the conditions of t °, hygrometry that are part of the same experience.

Scientists can not approach reliable tests without first having a good knowledge of the intrinsic characteristics of the species they intend to use. Indeed, the factors specific to the test species will come if necessary to weight the results obtained during the various tests envisaged. The use of living as encrypted data requires indeed more precaution than using only mathematical tools for example.

Test of resistance to external aggressions:

The example below shows the behavior of Folsomia candida in contact with Carbaryl which is an insecticide and a growth regulator used in agriculture to stop fruit fall. 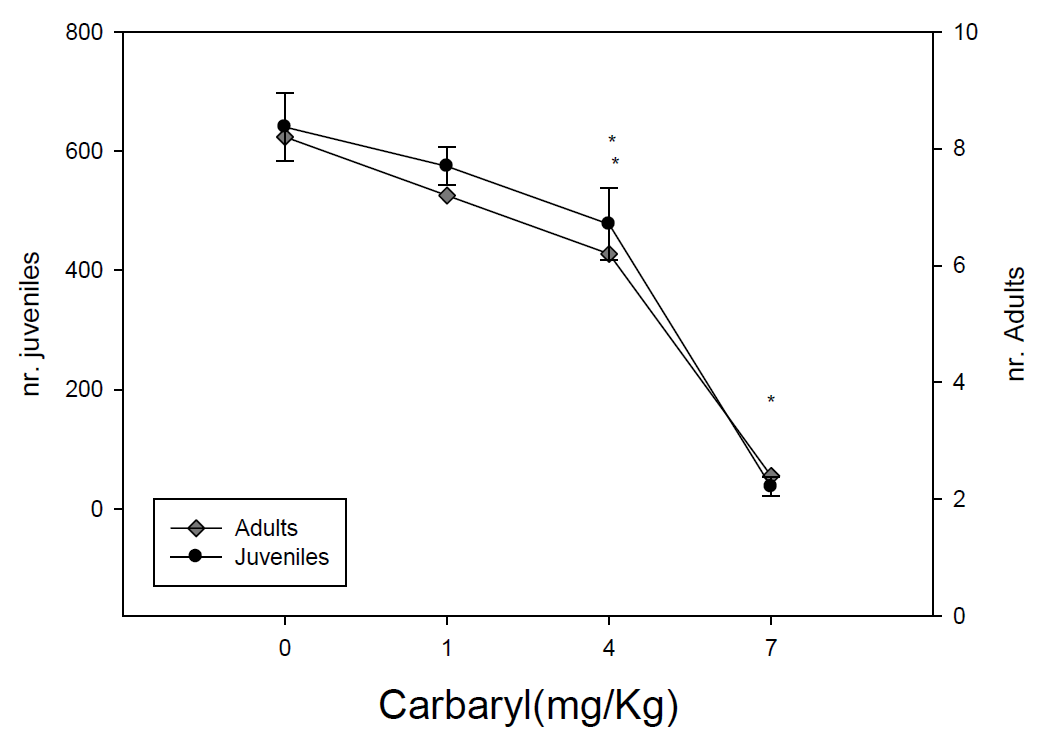 Here, two types of population are tested: Juveniles and adults over a carbaryl concentration range from zero to 7 mg / kg of substrate over a 28 day period. As the graph shows, the results are uplifting. With a dose of 6 mg the populations are halved whereas with 7 mg, the latter are totally decimated. It may be noted that during this exposure springtails continued to reproduce; between 4 and 7 mg concentration of significant differences was recorded with a test population (unexposed). On the other hand 7 mg / kg represent a threshold beyond which everything dies. EC50 (effective concentration) is 5.1 mg / kg and LC50 (lethal concentration) is 5.4 mg. We therefore understand from where come the recommendations of use given by the manufacturers of such products ... 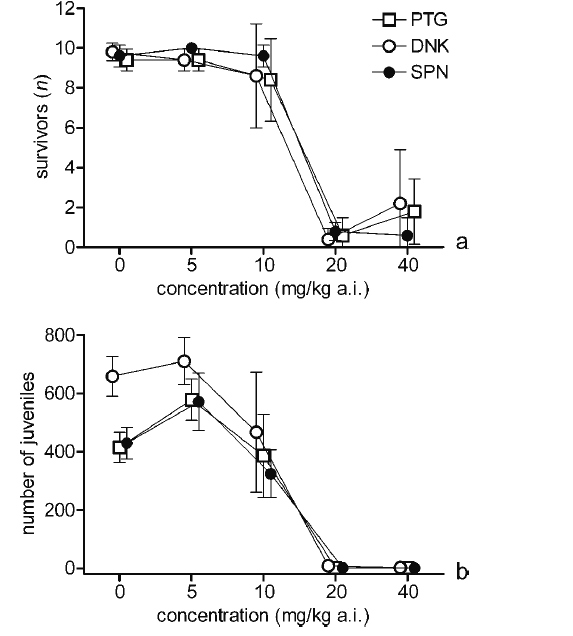 Let us now take the example of the impact of a herbicide such as phnenmedipham (part of Betanal sold by chemist Bayer or Beetup 160 EC marketed by Swiss Stähler). The use of this molecule is recommended for sugar beet, salad beet, and strawberry and spinach crops. The diagrams on the right show the impact on the survival and reproduction of a population of Folsomia candida.

The originality of this test lies in the fact that people from three countries, PTG (Portugal), DNK (Denmark) and SPN (Spain) were subjected to several concentrations of phnenmediphan. The genetic differences of the three strains were previously evaluated by "molecular barcoding". Springtails test population samples were prepared under identical conditions. The experiment was conducted during a 24 hour period decomposed in 16h of light + 8h of dark at a temperature of 20 ° C. The first diagram shows that from 10 mg / kg of concentration the number of survivors begins to decrease and that at 20 mg / kg all died.
For the reproduction tests, (while the non-exposed populations have survival rates around 94%), non-significant curves are obtained below 5 mg / kg, whereas beyond that, the curves decrease. to achieve a reproductive capacity of zero to 20 mg.

Personal note: These few examples I just mentioned highlight the harmful effects of all these chemical molecules that agriculture uses. It can be assumed that the impacts on humans can ultimately have a serious impact on their health. While the doses of these substances that enter our bodies may be infinitesimal relative to our body mass, but as they accumulate in our soil, our body stores them until one day, concentrations reach fatal thresholds, like those who kill thousands of small Folsomia candida every day in research laboratories around the world ... And what are we doing during this time?

* I recommend reading a very complete Canadian publication on the subject: click here.

** I also recommend reading an article by Sandrine SALMON, Engineer at the National Museum of Natural History in Paris: click here.

1 "Soil Population Studies I. The Effects of Cultivation and Treatment with Insecticides" - Sheals JG. 1956. - Bulletin of Entomological Research, 47: 802-822.

6 Diagram adapted from "Survival of collembola on clay substrates with or without food added" - K.Christiansen 1970