During the last two epochs of the Devonian (Frasnien and Famennien) there is a rarefaction of oxygen probably linked to a phenomenon of eutrophication which causes a very significant depletion of the marine fauna accompanied by what the researchers consider as one of the events the most important in the history of life on Earth: the exit of the waters. It is indeed during the Silurian and the Devonian that chlorophyllous plants and several large animal groups (mainly Arthropods and Vertebrates) have acquired anatomical structures and physiological functions that allow them to live out of water and conquer the land masses. The vast swampy areas and shallow areas are populated by new species of amphibians. On the Earth, among well-established bacteria, arthropods also emerge, such as isopod crustaceans (woodlice), myriapods (centipedes), chelicerates (ancestors of spiders and scorpions), some insects and especially the first springtails.

Paleontological studies show that towards the Upper Devonian (-365 Ma) there is a massive extinction leading to the disappearance of 70% of the species. Of which a good part of marine animals. Several hypotheses have been formulated in this regard, for example a cause of extraterrestrial origin, in this case a meteoritic impact that would have fractured the earth's crust and caused gigantic ejections of magma. Very recently, scientists1 reject this latter hypothesis to argue that extinction is more likely to result from environmental factors. A confirmation of this thesis is provided by the study of marine sediments (taken from old continental margins of Laurussia, Siberia and Gondwana) which proves that in just a few million years, a large number of marine species were decimated to the very heart of the oceans, far from the continental masses of the time (The Earth will experience many other massive extinctions, such as that of the Cretaceous (-66 Ma) which ended the supremacy of the great dinosaurs).

The first known fossils (below) classified as springtails (Rhyniella praeccursor) were found in Rhynie, near Aberdeen, Scotland, in 1926, in deposits of old middle Devonian red sandstone (~ 380 Ma). Hirst & Maulik who related them to the current Poduromorphs (Neanuridae). (below: artist's reconstruction and sketches of fragments, the photos at the bottom right show the mouthparts).

Since then, researchers have re-examined these fossils and have classified them successively in other families (in 1986, they were considered Isotomidae, by Greenslade & Walley). Scattered mouthparts, originally attributed to Rhiniella praecursor, were reclassified as Rhygnatha hirsti as an insect. In fact, the analyzes of polished samples revealed their ectognathe character (external mouthparts, as in insects). We are therefore in the presence of remains belonging to two distinct families. For Rhyniella praecursor, the presence of the ventral tube (collophore) attests that it is a springtail, as for Rhygnatha hirsti, it would be the first known insect. 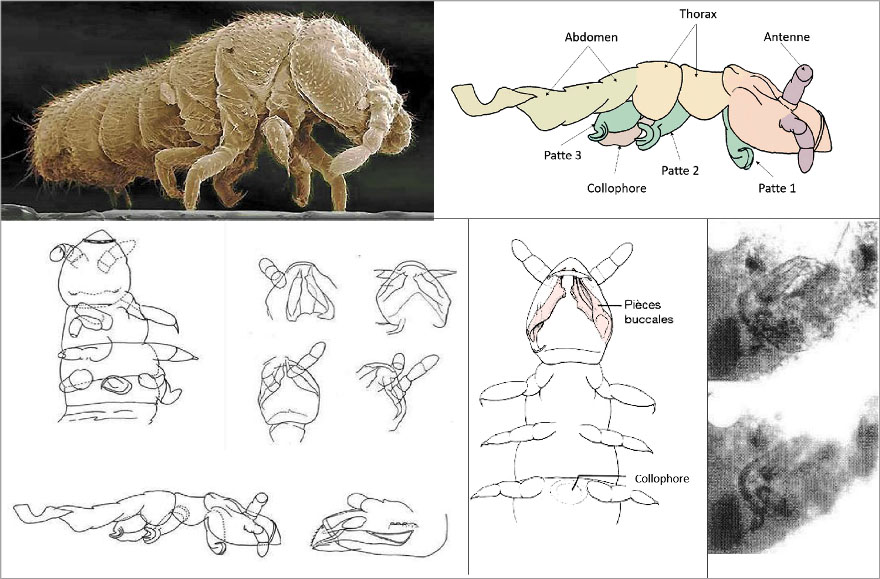 Older traces are rare and subject to interpretation. In contrast, recent discoveries of coprolites (fossilized feces) in Late Silurian (-412 Ma) rocks suggest that springtails were already an important component of the original ecosystem.

In 2016 researchers2 examined ambers from the Basque country dating from the Albian (Cretaceous period, between -113 and -100 Ma) and discovered there a male springtail Pseudosminthurides stoechus whose body measures 0.63 mm. ). 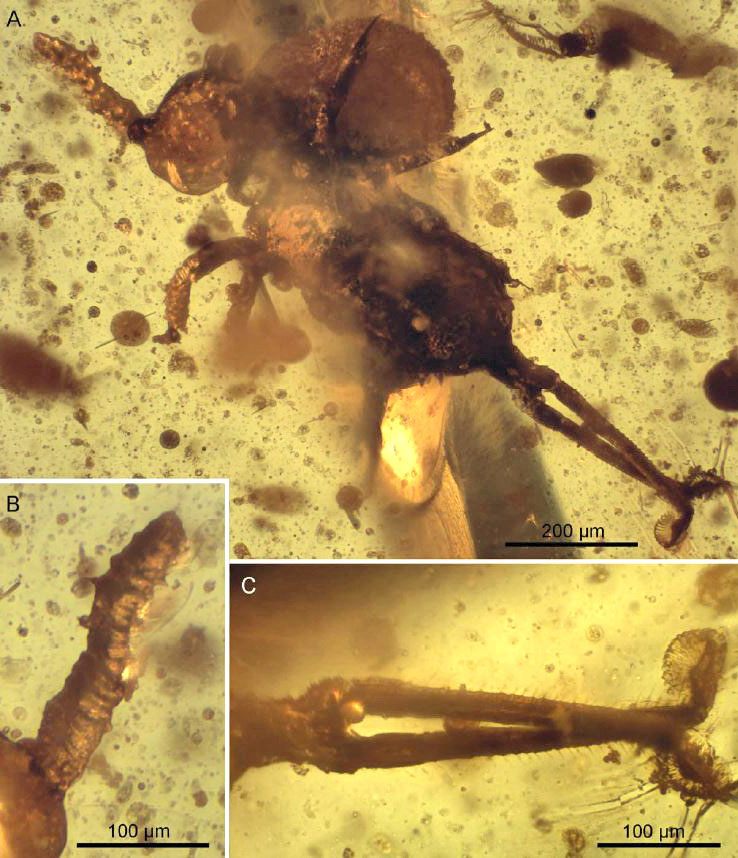 Proentomobrya collers have also been found in amber from Manitoba in Canada from the Middle Cretaceous (~ 95 Ma). Two biology professors from Grinnel College3 in the United States discovered this fossil, which they named Grinnelia ventis (below).

The continued presence of springtails, which have gone through several massive extinctions, which are fatal to many other animal species, and whose characters since the Devonian seem to have evolved relatively little, as the researchers4 notes suggests, in view of their ability to adaptation, that springtails, from this period, had reached a fairly successful evolutionary stage.

It should be noted that the majority of springtails trapped in amber were arboreal species which it is plausible to say that they descended gradually to the ground where we find today their descendants. This hypothesis is supported by morphological evolutions observed at the antennas and the arrangement of the legs relative to the abdominal segments.

Although springtails are rare on the amber inclusion market, I was able to obtain a small fragment (5x12x3 mm) of amber collected near the Baltic Sea. It is dated to the Eocene era, more precisely to a time around -40 million years ago. 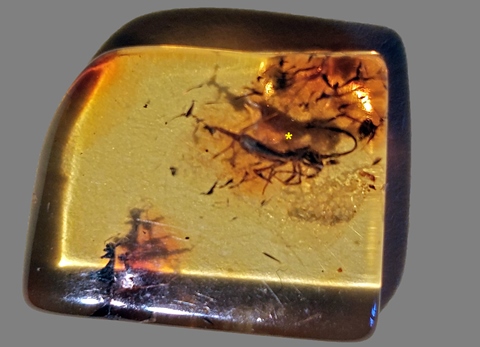 This amber also called "succinite" is a fossilized vegetable resin from a conifer (Pinus succinifera). This fragment of amber has been polished beforehand in order to better reveal its contents.

It imprisons a large collembola (size 4mm) of the emtomobryomorph type which, moreover, has similarities with our current Tomoceridae.

Observation under a microscope reveals the segmentation of the body and the presence of scales.

The furca is difficult to detect, however, there are details on the antennae which have four distinct segments, the third and fourth of which are provided with well-marked rings (Image below). 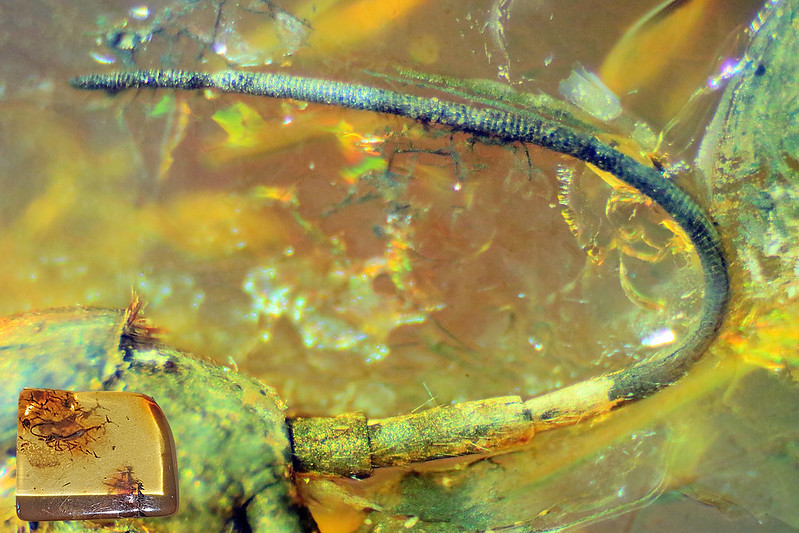 The end of a leg reveals the claw and a "clavate setae". The inset made with a different focus also shows the empodium.

Finally, the ocular plate shows quite clearly a group of four ocelli arranged in a square. It is difficult to distinguish a possible pair of ocelli which would be arranged like those characterizing the current tomoceridae. For better comparison, refer to the insert showing, as an example, the arrangement of the ocelli of a tomocerus minor today. 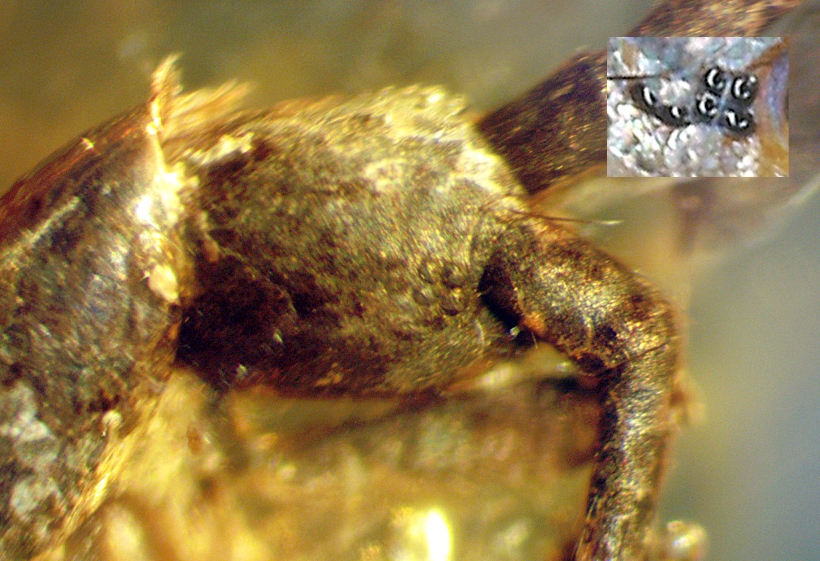