Springtails are almost absent in ancient literature. In Aristotle's notes on the History of the Animals, published in 1783, Camus, the author, takes up the only known passage in which Aristotle (384 BC to 322 BC) evokes verses that might to be springtails: "The snow itself produces worms as they age. As time makes it red, these worms are red too: they are hairy. In Media * they are white and big. The worms of the snow are all lazy to move".

We must wait more than three centuries before finding an indirect mention of the text of Aristotle succinctly mentioned by Pliny the Elder (23-79) in his book Histoire Naturelle. Stephen P. Hopkin in Biology of Springtails (Oxford University Press - 1997) refers to a text translated from Jonstonus (1653) referring to a spontaneous generation of "red hairy warms on snow", probably borrowed to Aristotle.
The first plausible mentions of this arthropod, still described as a verse, date from the end of the 17th century. For example, in the ephemerides of "The Academy of Nature's Curiosities of Germany", Dr. Charles Raygerus (Hungarian physician) tells how in 1672 (translation) :"He fell into a meadow in Hungary more than ten species of worms with snow, which lived there, and that one saw there to fill by troops during more than four days ..." a few years later, a certain Doctor Jean Chrétien Frommannus observes the December 2nd 1684 of the fleas of snow. 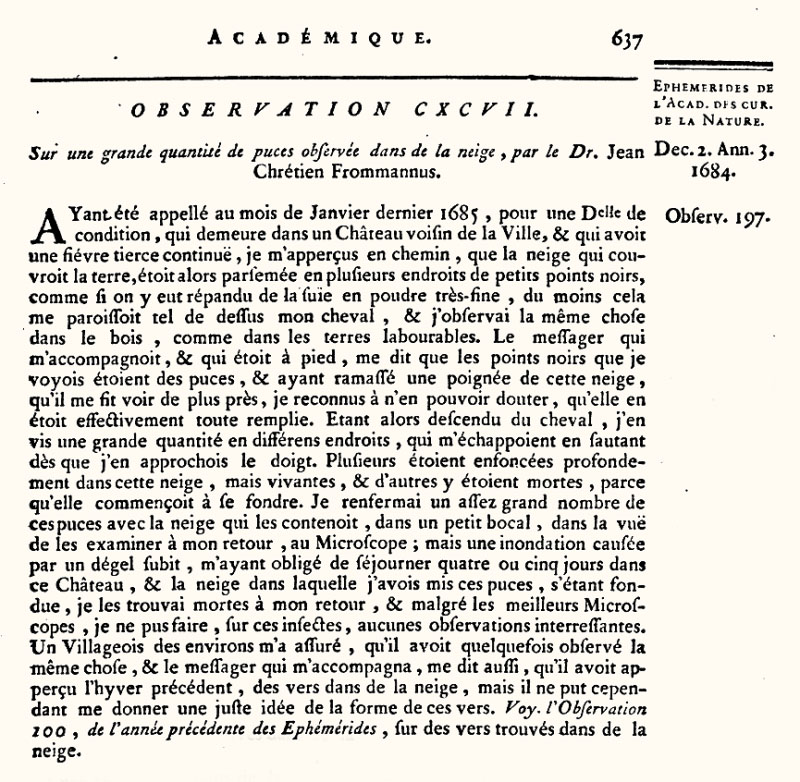 * Name given to a region of Asia Minor, located in the north-west of present-day Iran, between the Caspian Sea and the Persian Gulf. 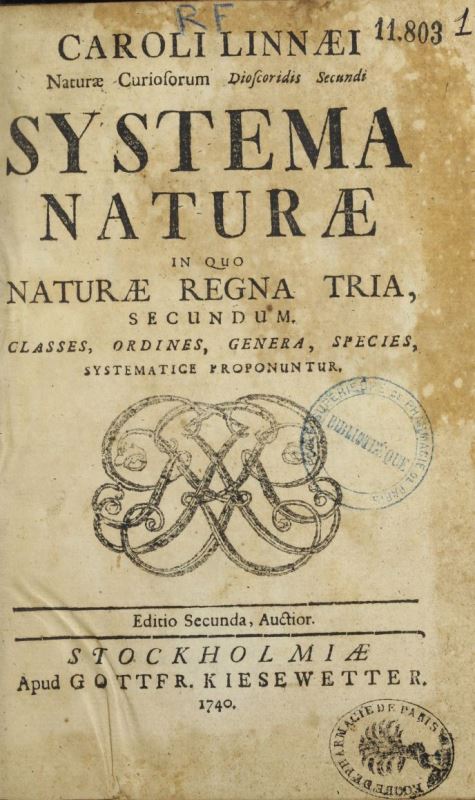 There are probably many other references to springtails during the 17th century, but it was only at the dawn of the 18th century that scientists tried to define the ordering of species, particularly through the classification work undertaken by the Swedish Charles Linné / Carl Von Linné (1707-1778) in his work Systema Naturæ, which had numerous editions and revisions between 1735 and 1770 and whose volume passed during this interval of eleven pages for the first publication to nearly 3000 pages (in three volumes) for the last one. Linnaeus has spent a lifetime cataloging and classifying animal and plant species. It is he who definitively establishes the nominative system called "binomial" which includes a so-called generic name and an epithet, for example for tspringtail Dicyrtomina ornata: Dicyrtomina being the generic and ornata the epithet.

In the following extract from an edition of 1740, Linnaeus refers to De Geer's work (1720-1778) to classify the springtails, then called Podura, among the insects, within the Aptera order (wingless), the mention alæ nullæ meaning without wings. 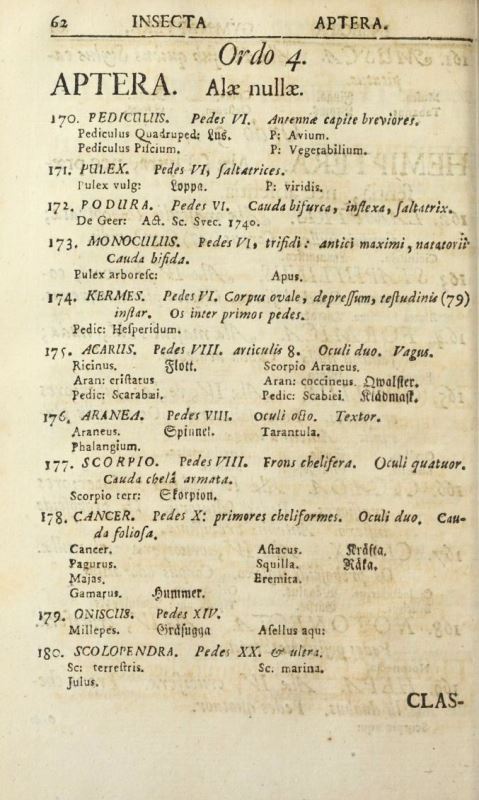 Having failed to find the version of Systema Naturae where appear for the first time descriptions of podures, I am down to the work of one of his compilers. Thus, I found a book by François Alexandre Aubert of Chesnaye des Bois (1699-1784) who is not a scientist training. Provincial entered the orders, he forges a bad opinion of the religious and leaves the Franciscans of Evreux and his monastic life. He is thrown into prison to expiate his faults and then exiles himself for some time in Holland, and then, on his return to France, he begins to publish all sorts of works. The interest of his book resides mainly in the fact that he transmits to us the latest scientific knowledge of time. In the preface he specifies indeed that he borrowed the descriptions of "M.Linnaeus for the insects and for the worms". It is therefore quite natural that in volume II of his work, we find a description from one of the many versions of Systema Naturae in which are described, probably for the first time, nine species of podures or podura: read from "genre III", in the pages below). 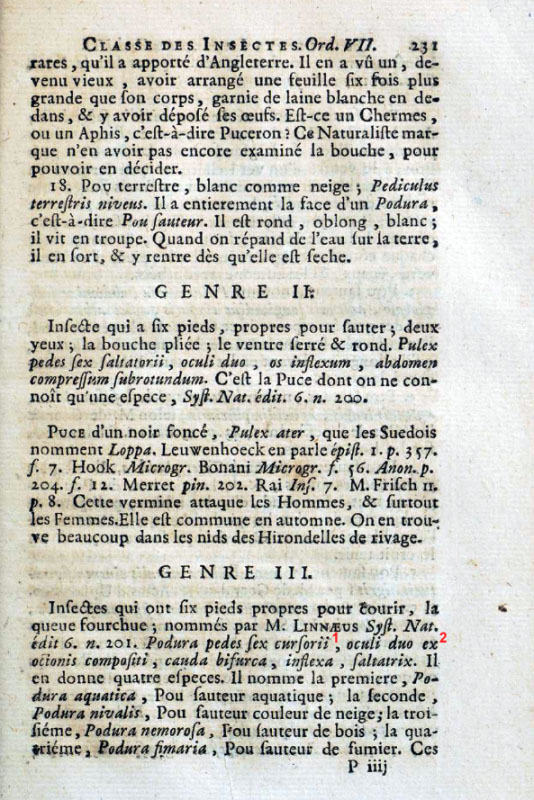 1 Podura pedes sex cursorii = "For who runs with six feet". 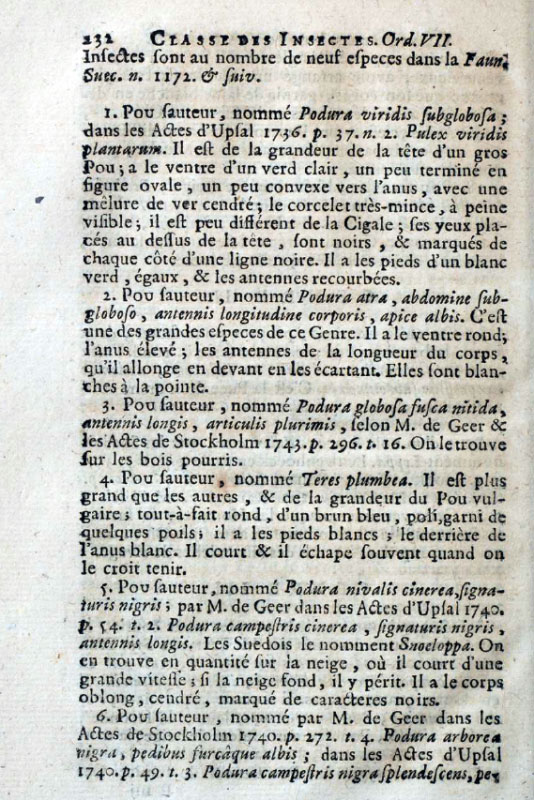 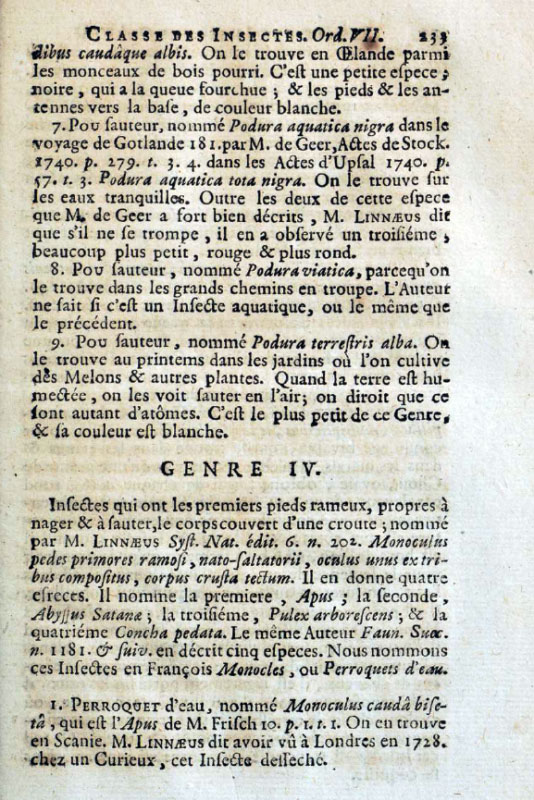 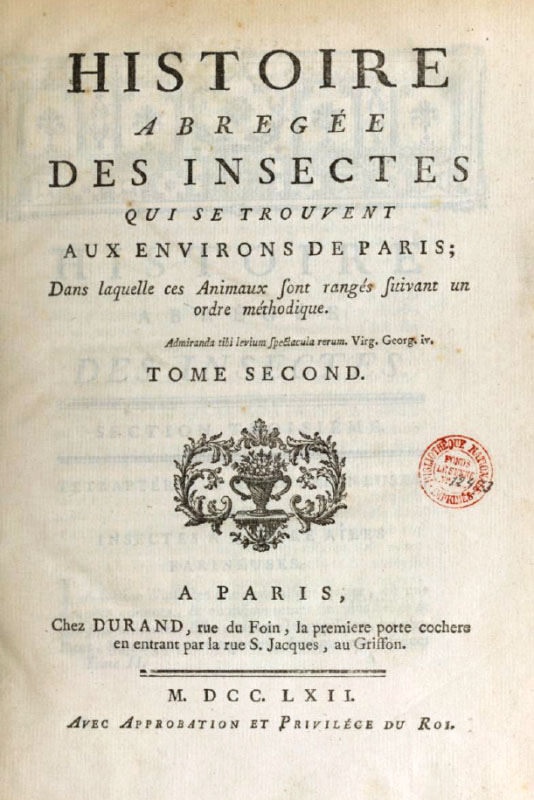 Étienne-Louis Geoffroy (1725-1810) is a Parisian pharmacist and entomologist. In 1762, he gives us a more detailed description, accompanied by a small board. This book received a very positive reception from its first edition from the community of great entomologists of his time, including the Swedish Carl Von Linné, cited above. This is what Jean-Baptiste Lamarck * of the Academy of Sciences wrote in 1801 in his book "System of animals without vertebrae" (translation): "Having found among the methods that have been published to date to determine insects no distribution which seems to me to completely fulfill its object, I have formed one which seems to me to offer more facility in use, more convenience in the reports, and which has the advantage of being closer to in many respects Linnaeus, Geoffroy, and Olivier's methods, which are without a doubt the best methods published in this interesting part of natural history. ".

The following excerpts are taken from the second volume-section III of E.L.Geoffroy's book (translation): "Abridged History of Insects in the Paris Area, in which these animals are arranged in a methodical order".

* Lamarck (1744-1849), to whom the first use of the term "biology" is attributed, established a classification of invertebrates and laid the foundations for a theory of the evolution of species. 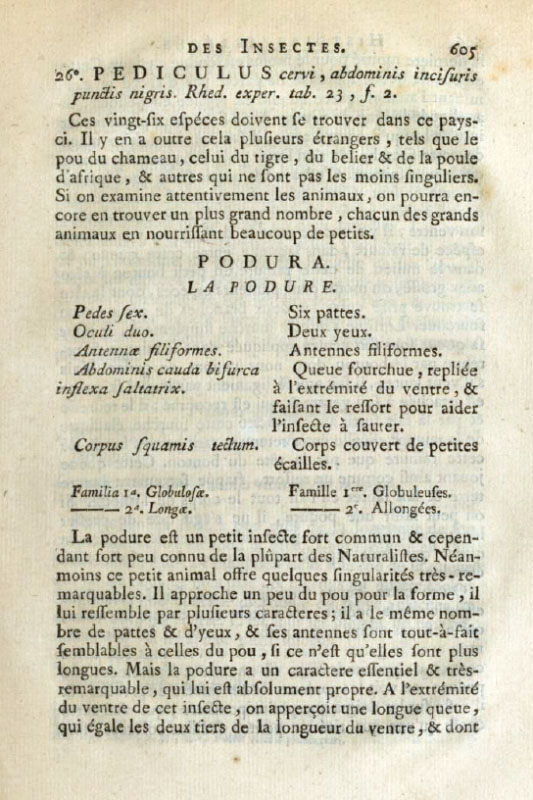 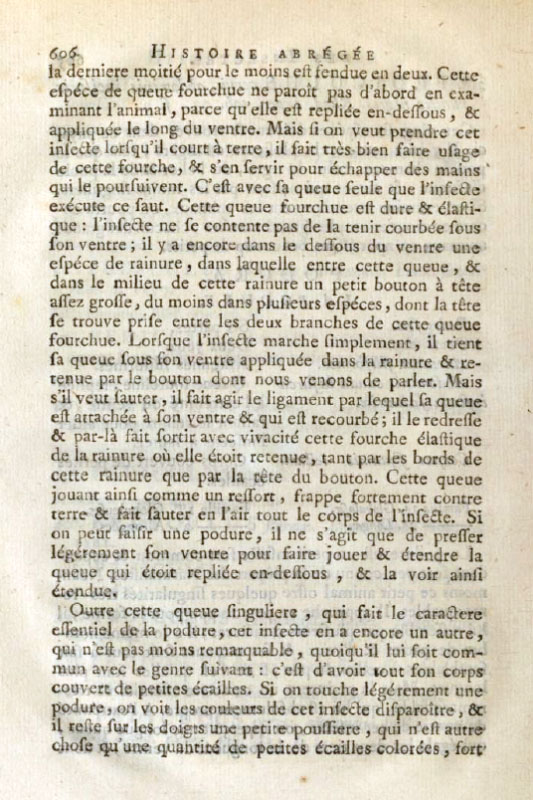 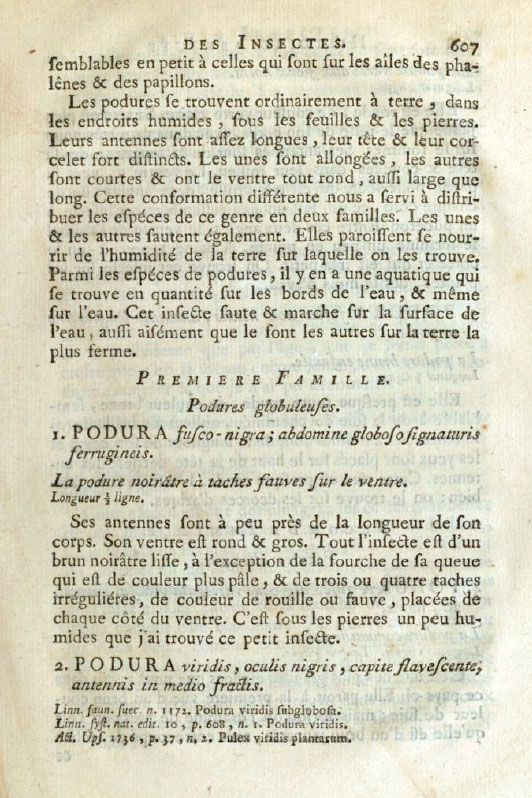 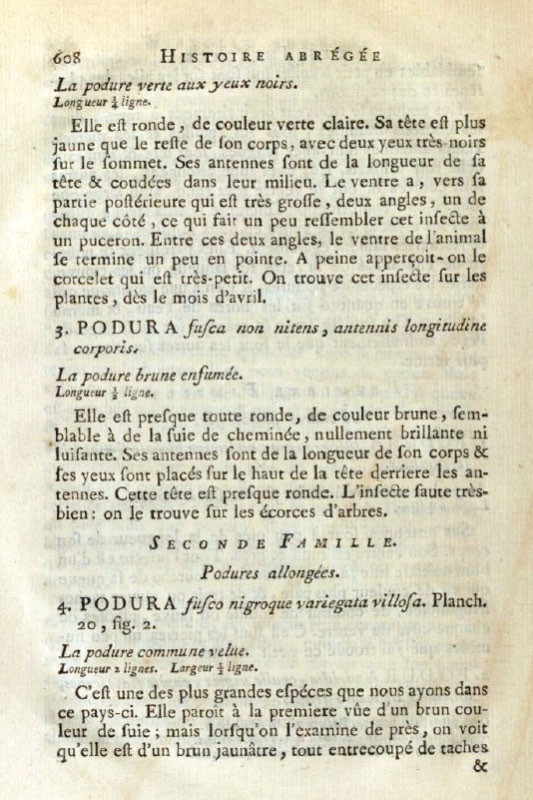 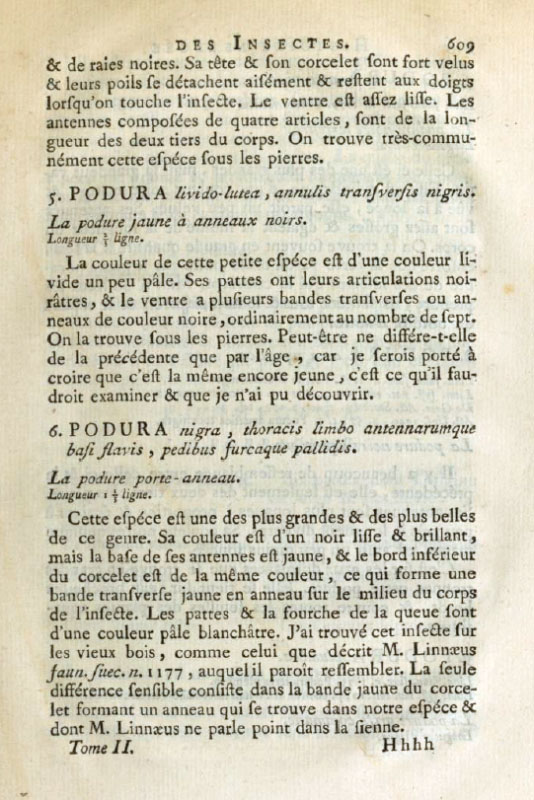 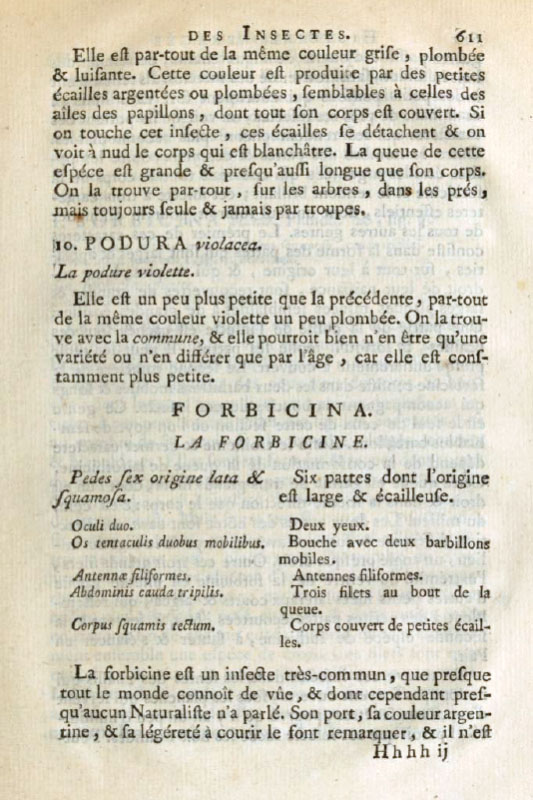 There is also in this same work the first descriptive plates with an engraving relative to the Podura of page 608 presented above.

I found a 1766 edition of Systema Naturae which proposes, for her, the description of fourteen species. Linné at the end of his work will have listed some 4,400 animal species and nearly 6,000 plant species. He became known as a physician of the Swedish royal family, and became famous in 1761, and in 1762 he became known as Carl Von Linné. 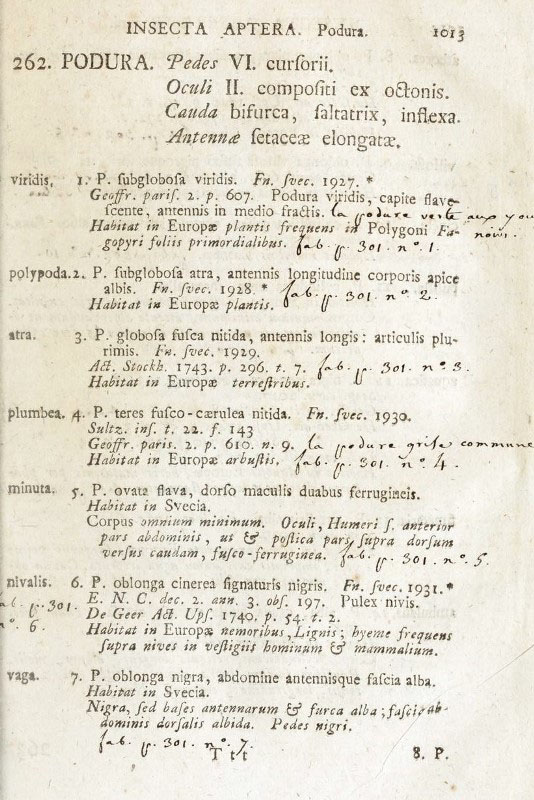 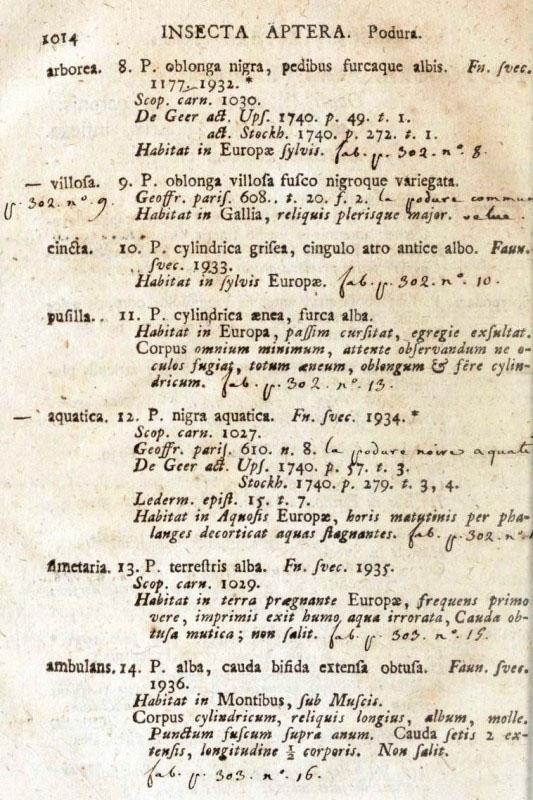 The last excerpt that I propose here comes from a fifteen-volume edition of the "Universal Reasonable Dictionary of Natural History" published in 1791. Its historical interest lies in the fact that, unlike previous publications, it may be considered that it is indeed a work certainly scientific but addressing this time to the greatest number. It is therefore not surprising to find no detailed description of the species then distinguished.

The author, M.Valmont de Bomare is an popularizer. The publishers thus present his work (translation) : "Much has been written in recent years on agriculture on the rural economy and on manufactures; and the works of scholars who have applied themselves to the treatment of these objects, have taught us the use which art must make of the gifts of Nature; so that today there is no branch of natural history, nor any of the objects relating to it, on which we have one or more Treaties, or at least some Dissertations or Academic Memory. So much wealth scattered and spread in an infinity of volumes, seemed to wait until a hand exercised in this kind of work brought them together and brought them together to form a whole and a complete body of Natural History ". 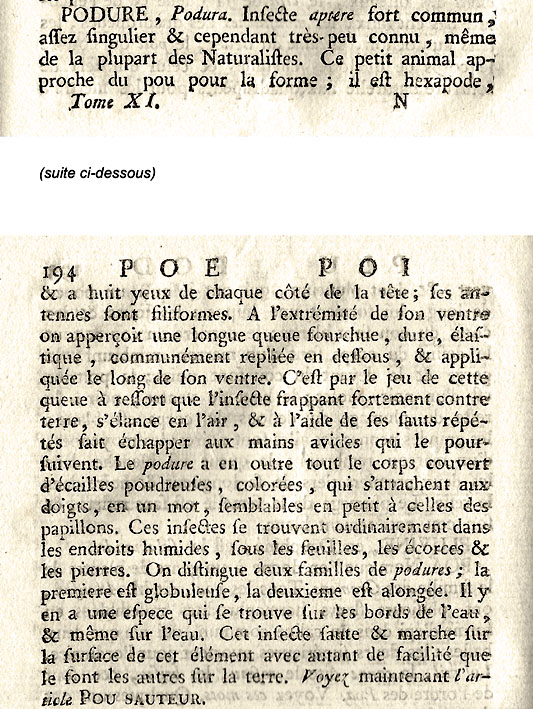 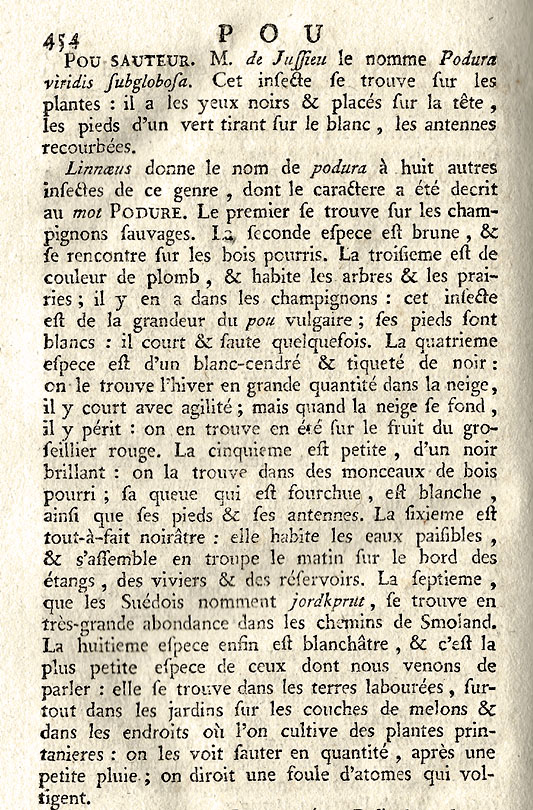 After this period, from the middle of the 19th century, we find a much denser literature about the Podures on which have focused the greatest naturalists of this century. As a result, classifications evolve and become more precise. Advances in optical microscopes first and the advent of scanning electron microscopes have led to enormous advances in the study of Springtails. More recently, genetic analyzes have expanded our knowledge, which is increasingly detailed in terms of anatomy and physiology. Finally, behavioral studies carried out on certain populations made it possible to highlight their mores and showed that these animals, although tiny, had prodigious resources of which probably still many were not highlighted.

To conclude this bibliographic part, not exhaustive, I will stay on the commentary of the publishers of Valmont-Bomare which underline the importance of the synthesis as a preliminary to the extension. Task that I will try to impose on each of the pages of this site.